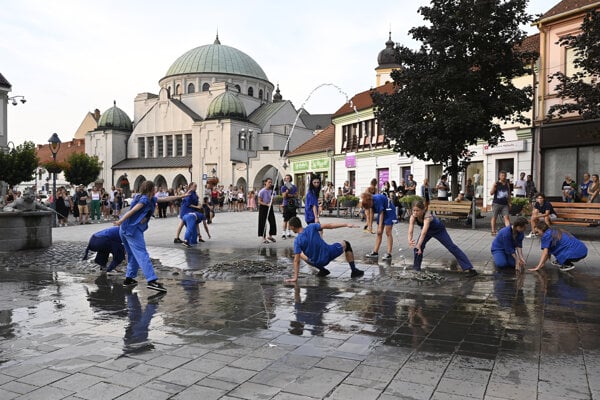 Dancers perform in the streets of Trenčín, spotlighting the architecture of the city. (Source: Radovan Stoklasa/TASR)
Font size:A-|A+  Comments disabled

This week, we are writing about a new Slovak Institute in Jerusalem, an open-air display in Bratislava, and jellyfishes in Teplý Vrch. 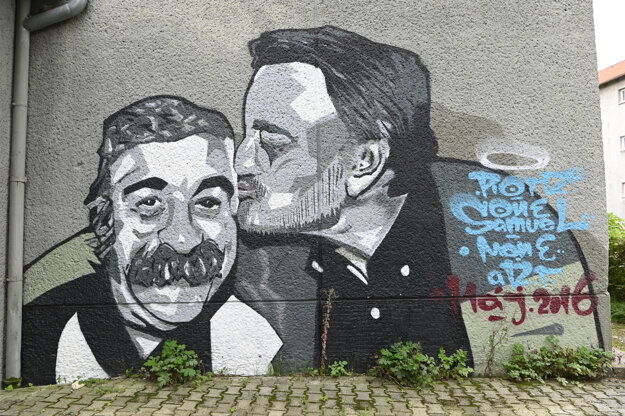 Slovak actor Milan Lasica (right), portrayed on a wall in Prievidza alongside his friend and colleague Július Satinský, passed away at the age of 81 on July 18, 2021. (Source: Radovan Stoklasa/TASR)

Slovak Institute to open in Jerusalem

In addition to eight Slovak Institutes around the world, Slovakia will open another one in Jerusalem on September 1.

The institution should strengthen mutual relations and cooperation between Slovakia and Israel with an emphasis on culture, art, and tourism.

“The Slovak Institute will be a meeting place for all those who are interested in Slovakia and the many opportunities we offer for cooperation,” Foreign Affairs Minister Ivan Korčok said.

More than 10,000 Slovaks work and live in Israel, hundreds of Slovak students study in the country, and more than 20,000 Slovak tourists visit Israel every ear. 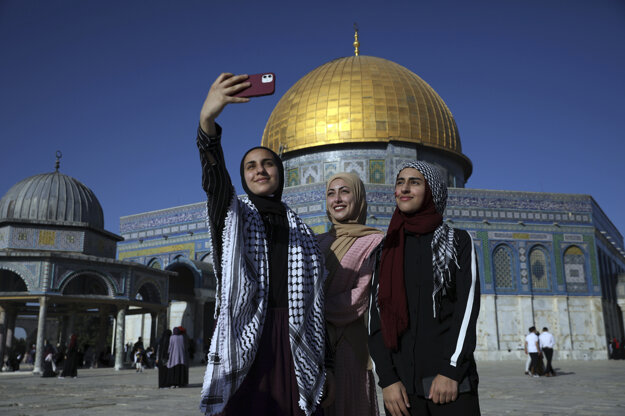 Women pose for a selfie in Jerusalem. (Source: Mahmoud Illean/AP)

The Slovak embassy remains seated in Tel Aviv. Korčok stressed Slovakia does not want to change its position on the Middle East peace process with the establishment of the institute, which is in line with UN Security Council resolutions and internationally agreed parametres.

The “Journey through Slovak America” exhibition, which has been launched this week in Bratislava, presents the cultural mission of the delegation from Matica slovenská, a cultural institution focusing on the Slovak nation, to cities in the USA and Canada in the years 1935-36.

The display will remain under the canopy of trees on Hviezdoslav Square until the end of July. 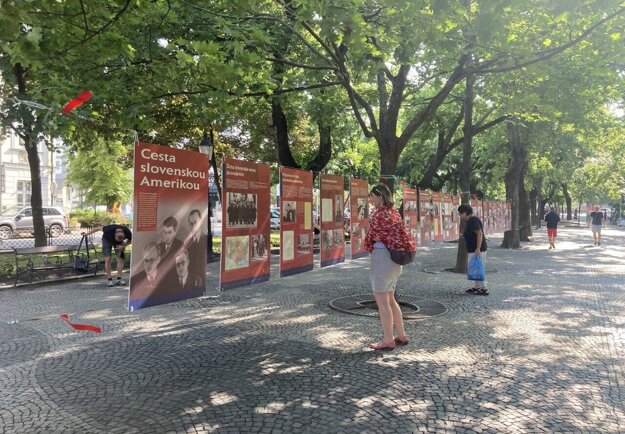 It was this trip that helped nurture relations with Slovaks overseas, although this connection has been declining steadily in the past years.

The small delegation, which writer Jozef Cíger Hronský and cinematographer and folklorist Karol Plicka were a part of, spent several months abroad and visited towns near New York, Pittsburgh, Detroit, Cleveland, and Chicago.

The delegation prepared hundreds of presentations and displays on folklore, literature, art, history, and life in Slovakia, and they also carried 40,000 books and 6,500 magazines with them to America. While overseas, they collected documentary materials about American Slovaks as well.

Cíger Hronský wrote in his book about travels around America that Slovakia should never forget and always care about the Slovak community in America. He even worked out a cultural plan for Slovak America. 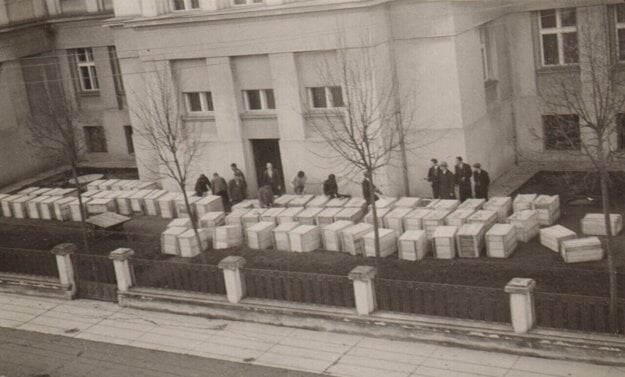 Books for American Slovaks being packed in 1935. (Source: Matica slovenská)

“He put an emphasis on the regular exchange of people between the Slovak and Slovak-American environments,” Zuzana Pavelcová from Matica slovenská said.

Related: Dive into Jozef Cíger Hronský's observations about Slovak America at the turn of centuries.

Thousands of small white freshwater jellyfishes are thriving in the Teplý Vrch reservoir in the south of central Slovakia. The water here is the warmest in the country.

Experts said that a freshwater jellyfish is not harmful and does not produce any toxic substances. On the other hand, it acts like a “small treatment plant” because it eats plankton.

The Slovak Water Management Company has registered the invasive jellyfish, which originates in China, in the reservoir for the past three years. 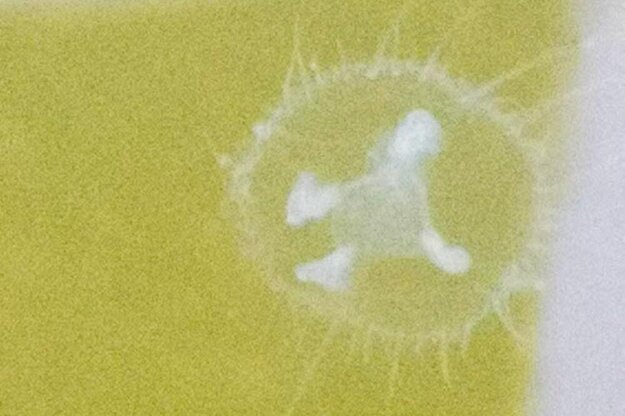 However, this species of jellyfish was first observed in Slovakia much earlier - in the 1960s in the dried-up branches of the Danube in the town of Gabčíkovo. Thirty years ago, the aquatic animal appeared in the Štiavnické vrchy protected landscape area as well.

Related: Pick a spot for a swim in Slovakia or in Bratislava.

The latest travel podcast episode puts a spotlight on the quintessential Slovak region of Kysuce in the north of the country. Three different guests, including two foreigners from Portugal and South Africa, unveil some of the beauties of this region. 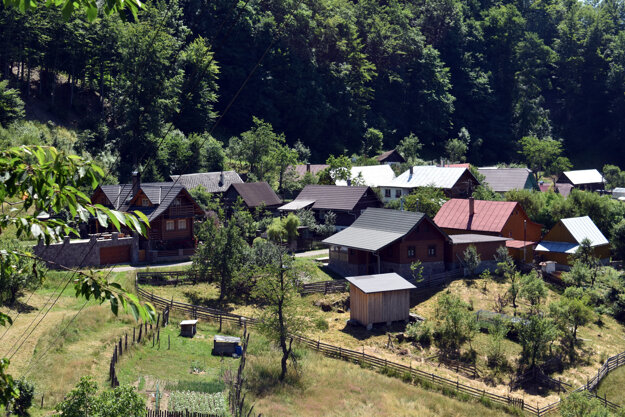 The Kýčera hilltop settlement above the town of Čadca in the Kysuce region. (Source: Peter Dlhopolec for The Slovak Spectator)

Talented and narcissistic, Štefánik is a hero for Slovaks

Milan Rastislav Štefánik, who was born this week 141 years ago, was a narcissist who mastered the skill of twisting people around his finger and turned himself into a legend.

“He was extremely ambitious,” said historian Michal Kšiňan. “He loved creating a legend about himself.”

The Slovak statesman, who is regarded as the most prominent Slovak, was great at moulding his legend. Find out how he managed to become a hero and what strategy he used. 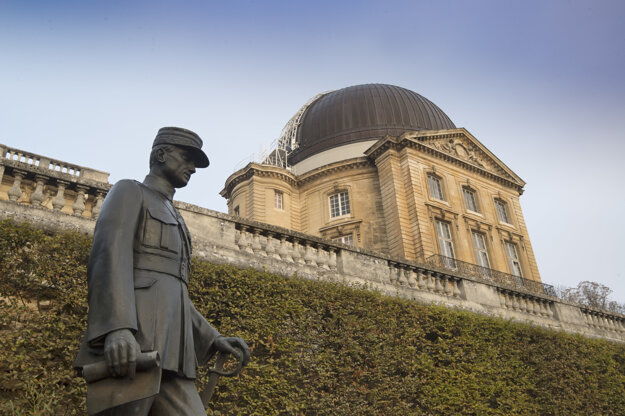 The statue of MRŠ by the Meudon Observatory in Paris. (Source: Pavel Neubauer/TASR)

Slovakia is sending its smallest Olympic team in history to Tokyo, where the Summer Olympics start on July 23. The hopes for those athletes attending the sporting event are high, pinned on shooters, cyclists, and water sport athletes.

Team Slovakia has 41 athletes; archer Denisa Baránková is the youngest and golf player Rory Sabbatini from South Africa is the oldest. But what sports does Slovakia have a chance to win medals in?

Related: Slovakia's Olympic representation will have two flag bearers at the opening ceremony.