Discover the monastery once inhabited by Carthusian monks and the "flying" rocks in the Pieniny mountains. 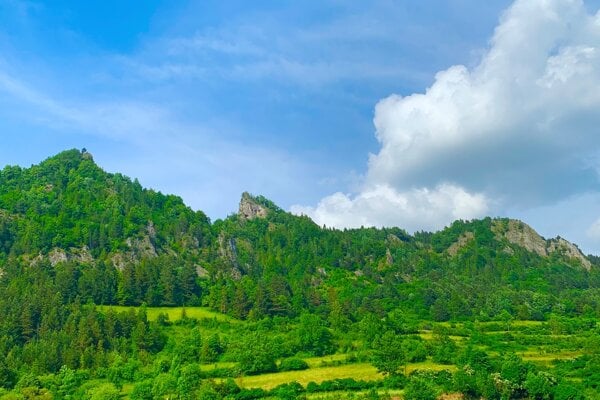 “You should follow the orange or red points on the rocks. It will show you the way, and lead you to the final destination,” our friend Andrea said to us before we started our trek in the Skaros forest on Lefkas.

So we started our journey.

Sometimes we found the mark, sometimes not.

Sometimes we explored more paths until we found the right one.

We hiked through the forest, which was unlike any we had known. We hiked among rocks, through a parched and dry plateau, along an empty river-basin.

Until we found ourselves in front of the ancient monastery. An old monk, dressed in a long black robe spoke to us from the doorway.

A flow of his words tried to find a way to us. He spoke Greek.

And we did not understand. We just stood there and listened to him silently.

In silence and reticence lived the Carthusian monks. The silence protected the flow of their thoughts and their inner harmony.

They lived in the the Červený Kláštor (“Red Monastery”) in the north-east of Slovakia.

This monastery was founded in 1330. The Carthusians chose a place embraced by nature, in the most beautiful corner of the Zamagurie region.

And even today, the strong walls echo the calmness and contemplativeness of this special and secret order, for which reticence was the essence of growth.

And which, in silence, listened to their hearts for guidance.

Silence surrounded us on this morning, when we decided to explore the secrets of Haligovské skaly rocks. The red marked hiking path started in Červený Kláštor. A mild uphill way led us to the Cerla saddle. There we observed the rocky towers, the “Seven monks”. Legend says, seven monks from the Red Cloister were allowed to go to a neighbouring convent, to visit the nuns there for a single day. Instead they stayed for a week and as punishment were turned to stone. Today they still stand, these seven, frozen as stones towers, following the course of the river. Their only hope of being freed is if 11,000 virgins cross the bridge in front of them.

Our 14 km long hike continued uphill again, and the views of Pieniny, the smallest Slovak national park, were revealed.

The way was continuously uphill.

And just when you think, you've reached the top, it starts up again. And again.

Until you arrive at a meadow under Plašná mountain. And a forest. A primaeval forest. Such type of forest is everywhere here.

This calm and unbroken forest, mixed with high grasses, and the smell of blueberries and raspberries.

Back to the monastery

The Haligovské skaly rocks are gigantic. They suddenly appear above Haligovce village. Their limestone ridges are almost 500 m high and arise above the valley of the Lipník stream. You can find here rocky towers, carst valleys, and many caves. The best-known are Aksamitka cave located in the Červená skala rock, and the Zbojnícka jaskyňa cave under the Hrubá skala rock. 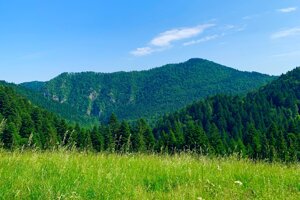 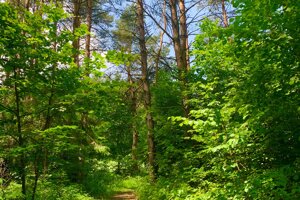 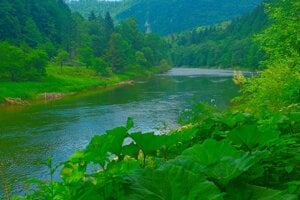 From Plašná mountain we came down to Lesnica village. Here, on the bench in front of the local market, we waited out the rain.

And then we hiked up and down again, crossed the river, until we ended in the former metallurgical settlement of Huty. The Hussites settled here in the 15th century, and in the 12th century a glass manufactory was located here.

We left the forest behind us on the bank of the Dunajec, in the past not a river, but a lake. We walked along it back to Červený Kláštor.

Wooden rafts and rafters greeted us from the water.

And we admired this gorgeous river embraced by the monumental rocks, which begins in Nowy Targ at the junction of two short mountain rivers, Czarny Dunajec and Biały Dunajec (“Black and White Dunajec”).

Only several parts are faster. There waves twiddle and dance, get faster from a slow fox trot to quicker waltz.

When dew glitters on each grass-blade, falls slowly from the leaves, and refreshes the thirsty bills of birds.

When the sunrays force their way through the clouds.

At that time silence is everywhere. Around us, inside of us.

At that time each thought searches for a way out.

During that time we walk slowly through the forest. Not to wake it up.

Because each journey starts with one slow footstep.

The longest one, to Mount Everest. And even this one around the Haligovské skaly rocks.

It is always about this first, careful footstep. And not each hike in the mountains must lead to the summit, it can lead around it.

The hike up is not ended at the peak cross. But in the basecamp. Because the hike down is always more complicated.

You should walk slowly. Carefully.

And maybe you will hear the rocks grow.