Opposition Smer gaining on the second most popular party in polls

Even though the party ended up third in the recent opinion poll carried out by the AKO agency for the private broadcaster TV JOJ in the first half of December, its result was not much worse than that of the second most popular party, Freedom and Solidarity (SaS). 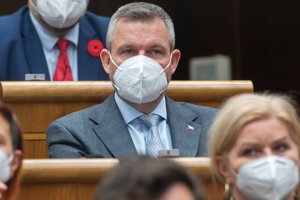 Poll: Hlas would win the election, coalition would not have enough votes to rule Read more

The election would be won by Hlas, led by another ex-prime minister, Peter Pellegrini, supported by 19 percent of the vote.

Five more parties in the house

The strongest coalition party Ordinary People and Independent Personalities (OĽaNO) would come fourth with 9 percent of the vote, followed by Progressive Slovakia with 8.6 percent, Sme Rodina with 6.5 percent, and the Christian Democratic Movement (KDH) with 6 percent.

The last party to pass the threshold would be Republika, created by the renegades of the far-right People’s Party Our Slovakia (ĽSNS), with 5.9 percent.