A business would not steal a car but software...

IN MAY this year, shop assistants at two computer retailers in Štúrovo, southern Slovakia, offered to install pirated software on a PC that a customer had inquired about buying. The assistants told the customer they could pretend as if they had accidentally left the software on the computer’s hard disk, so that it would not appear on the invoice. Those shop assistants are now being prosecuted for software piracy, as the customer was actually a member of the Business Software Alliance (BSA). 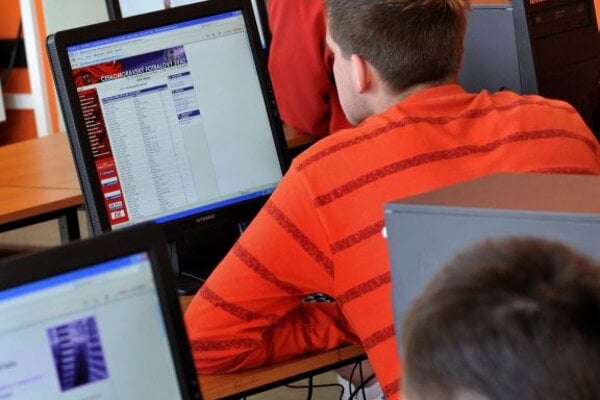 IN MAY this year, shop assistants at two computer retailers in Štúrovo, southern Slovakia, offered to install pirated software on a PC that a customer had inquired about buying. The assistants told the customer they could pretend as if they had accidentally left the software on the computer’s hard disk, so that it would not appear on the invoice. Those shop assistants are now being prosecuted for software piracy, as the customer was actually a member of the Business Software Alliance (BSA).

Ten years ago, 90 percent of all software used in Slovakia was pirated, industry experts say. Since then, the rate has dropped to 45 percent, where it has been for two years, according to a study published this May by the BSA. The study, which is based on market intelligence IDC data, estimates that piracy has cost the Slovak IT industry $54 million (€43.3 million) in lost revenues.

Industry experts say that 45 percent is high enough to conclude that the Slovak public and business sector remain unaware of the need to protect software copyrights. Piracy is most common among small firms and households, they say.

“For two years in a row, 2006 and 2007, piracy has remained at 45 percent,” said Adriana Tomanová, a legal representative for the BSA. “In my lectures, I say that, in reality, it is 50 percent, which means that almost half of software is used illegally.”

It is an alarming number compared to, for example, the regional average in Western Europe, which is 33 percent, she said.

However, Juraj Sabaka, president of the IT Association of Slovakia (ITAS), noted the progress that has been made over the last decade. He added that he does not consider the current rate too high when compared with other countries.

The BSA study included a survey of the frequency of pirated software across Europe. In Central and Eastern Europe, Slovakia ranked third after the Czech Republic, with 39 percent, and Hungary, 42 percent. The highest piracy rates were reported in Armenia, 93 percent, Moldova, 92 percent, and Azerbaijan, 92 percent.

“We have to realise,” Sabaka told The Slovak Spectator, “that, 15 years ago, Slovaks considered software something that you didn’t pay for at all. Now, Slovakia is among the more developed countries, but a great deal of work is still before us. I don’t want to say that we should be satisfied with the current rate.”

Sabaka said Slovakia has the potential to cut the current rate by roughly 10 percentage points over the next five to 10 years.

Slovakia could cut its rate further if awareness increased among firms and households, Tomanová said. The BSA would like to see the rate drop by 1 to 2 percent a year.

As well as a low awareness of the need to protect software copyrights, Tomanová said people in Slovakia use pirated software because they believe they won’t get caught and because it is easily accessible via the internet and P2P (peer-to-peer) networks. Some businesses even use pirated software as a tool to increase competitiveness, she said.

“An entrepreneur doesn’t buy the necessary licences and then sells the products cheaper than others who paid a considerable amount, such as graphic artists and architects,” she said.

Miriam Mádrová from Microsoft’s office in Slovakia reiterated that awareness of copyright protection is insufficient among the Slovak public.

“Software is the same product as hardware or any other goods,” she said. “The majority of people realise that they should buy rather than steal a graphics card, for example, but don’t for some reason when it comes to software.”

Mádrová said that Slovakia has one of the lowest prices in the world for legalising Microsoft Windows and Office, at approximately Sk5,000 (€165.97). At the same time, the company has introduced price-accessible software packages, such as Microsoft Office 2007, for students and households.

If the price of Microsoft software was truly the reason for piracy, Martin Baranovič from Eset said, then the countries where it is most expensive – Western Europe, Japan and the United States – would have the highest piracy rates. And China, Russia, and South America, where it’s cheapest, would have no piracy, he said.

“However, the opposite is true,” Baranovič said. “So there is no correlation or causal relation between price and piracy rate.”

Madrová stated that copyright protection is one of Microsoft’s top priorities. The company has recently incorporated several methods for detecting illegal software, including the WGA (Windows Genuine Advantage), notifications for Windows XP and Windows Vista. It is also enhancing the options for software legalisation.

Eset said it uses all accessible legal tools, including prosecution. It noted that several cases have resulted in criminal convictions.

Tomanová said that the BSA regards firms with up to 50 computers as most susceptible to piracy. So-called “burners” or “internet pirates”, which operate through P2P networks, are another high-risk group.

“And we monitor PC dealers, who sometimes install illegal software on customers’ computers,” she said.

Sabaka cited small businesses as some of the most frequent offenders, because they are unwilling to pay for legal copies of the software.

“And there are, of course, so-called entrepreneurs, but for me they are thieves, who illegally copy and sell someone else’s software,” he said.

He added that the situation is better at larger firms that realise the detection of illegal software would seriously harm their reputation.

Seven directives were adopted when Slovak legislation was harmonised with EU law. Moreover, Slovakia has ratified dozens of international agreements on the subject.

The re-codification of the Penal Code also created sufficient adjustments. Software piracy is now punishable by up to eight years in prison.

However, Tomanová believes that the best tools in the battle against software piracy are awareness and youth education in IT lessons.

“Currently, almost everyone uses a computer at work to make money,” she said. “People who would never steal a car or a mobile phone, for example, still consider burning software normal.”