“I AM very proud to have the family name Kala, which means fish in Estonian, and I told my husband long ago: if we marry, the fish will be there,” said Eve-Külli Kala, the Estonian ambassador to Slovakia, while preparing Estonian herring dishes at her Vienna residence, adding that fish is an essential part of Estonian cuisine. 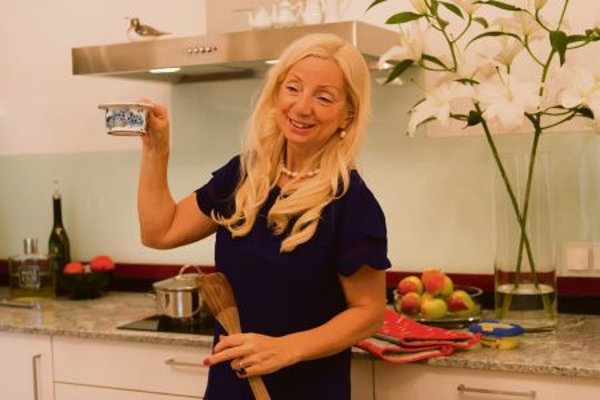 Kala placed Baltic mini herrings on Estonian rye bread triangles; then she coated the herring with sour cream, slices of egg and rings of onion, and for the third dish she mixed herring slices with cottage cheese, eggs, sour cream and dill.

“When I go home, from Vienna, I mostly eat fish, which we don’t buy but rather catch ourselves,” said Kala, explaining that even today fish, particularly herring, features prominently on her family’s table since her father and brother are avid fishers. “At five o’clock in the morning they come home from the sea and then we smoke, fry or marinade the fish.”

The herring dishes are an essential part of the traditional Christmas table in Estonia, said Kala while working on an Estonian Christmas menu for the Cooking with Ambassadors programme prepared by The Slovak Spectator and TV Sme. According to Kala, it is a rather simple menu, but this is how her Estonian ancestors celebrated Christmas.

“They were mostly farmers and people ate quite simply,” Kala said, adding that those who were a little better off had cattle or pigs and they could afford to eat bacon and pork. “Poor people in those times ate mostly fish since half of our land borders the sea and the fishing culture was widespread. The fish, herring and sprats were salted, marinated or smoked and preserved in huge barrels for the winter.”

To make the Christmas table authentic, Kala added black pudding, made from pork blood and barley, and sauerkraut to the menu, which she then crowned with a recipe she inherited from her grandmother and developed further: the Eve-Külli biscuit cake, made of traditional Estonian biscuits and what she called “the best sour cream in the world”, from her homeland, seasoned with the herbal liqueur Vana Tallinn, popular in Estonia.

“The pig was well-fed for Christmas time, and after we sent the pig to heaven, we made a lot of good food,” Kala said, explaining a tradition which is also still practiced in many parts of rural Slovakia.

When discussing the tradition of fishing, Kala said that much of the village fishing culture disappeared under the Soviet regime, but Estonians are trying to revive this culture and preserve the old farmhouses close to the sea.

As for the influence of other nations on Estonian cuisine, Kala suggested that “everybody who is around us has given something and I think it’s great when you keep your mind open and you’re not too protective, while you still want to keep your own dignity and pride”. According to Kala, among the influences, perhaps one of the most famous is gravlax from Sweden and Finland. Pirozhki pies and borscht from Russia are also popular, while the Germans brought sauerkraut, she added.

What Kala misses from Estonian food when abroad is ‘smetana’, Estonian sour cream and yoghurt, as well as Tallinn marinated mini-herrings and black rye bread.

In the old times, Estonians drank homemade beer and schnapps made from berries and apples, said Kala, while showing an ornate Vana Tallinn liquor bottle to illustrate one of the country’s traditional alcohol drinks.

“And of course vodka is a must on our table, but there is a big difference because nowadays we know how to drink it,” Kala said.

Yet, Estonians are growing more health conscious and some of their eating habits are changing as well: traditionally dinner was the main meal of the day, when the whole family sat around the table, and once the father started to eat everybody could follow. It was a heavy meal, Kala explained.

While the dining table is still a major family meeting place, the dishes are no longer that heavy, Kala added: “we don’t eat so much our traditional bacon, and we consume more salads and fish and kind of lighter food”.

Kala likes Slovak, Czech and Austrian food as well, and she instantly explores the cuisine of any new country she visits, but definitely prefers to skip fried food and other heavier meals.