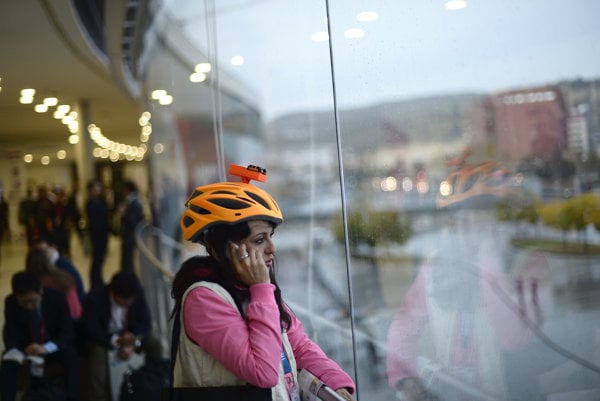 Slovaks now have a quite extensive offer of mobile services to choose from. (Source: AP/SITA)
Font size:A-|A+1

THOUGH it may appear there are seven or more mobile operators on the Slovak market, a closer look shows that many are so-called branded resellers which target clientele beyond their traditional target groups.

Apart from established mobile operators there are also services offered under brand names like Juro, FunFón or Tesco Mobile. Compared to established operators, their offer of calls and other services is narrower, but the prices are usually lower.

“Mobile phone operators can address customers that have not identified with the corporate culture of the big operators,” said Ondrej Macko the editor-in-chief at Touch IT, adding that such services are often provided via pre-paid cards. “They are mostly designed for young people. Usually such an offer is oriented on a low call price while these services most often focus on calls and text messages.”

Currently, mobile phone and data services are offered by four providers: Slovak Telekom, Orange Slovensko, O2 Slovakia and Swan Mobile while the first three offer their services also via brands Juro, FunFón or Tesco Mobile respectively. Of these Juro, referring to the folk hero Juro Jánošík, is the latest one.

“Juro is a brand aimed at the customers who prefer calls to more networks with not too high volume of minutes and text messages,” Slovak Telekom spokesman Michal Korec told The Slovak Spectator.

Slovak Telekom has decided to launch Juro to address a new segment of the market under the slogan “folk operator” (ľudový operátor). Juro has several target groups while its ambition is to address, by the simplicity of the product and low prices, customers over 45 years, and people younger than 18 who are used to the prepaid credit, said Korec.

Orange Slovensko, via FunFón, addresses primarily young customers, who do not require the full service of the operators, but they seek cost-effective communication and quality network coverage.

O2 has partnered with the retail chain Tesco and offers it services under the brand Tesco Mobile.

“Tesco Mobile tries to build on the quality network of O2 and the good accessibility of the Tesco stores in Slovakia,” O2 spokeswoman Martina Jamrichová told The Slovak Spectator, adding that they have more than 200,000 customers.

A client of Tesco Mobile is primarily a customer shopping in Tesco stores and using its loyalty Tesco Clubcard programme.

Services offered under the branded reseller scheme offer only pay-as-you go packages with set prices and do not include contract options with multiple choice of prepaid minutes and data. On the other hand, the price for basic calls and internet is lower than the comparable offer of a traditional provider. Each of them offers different benefits, for example in form of an additional data package for customer loyalty or a lower price for regular top-ups.

“Another reason is to separate the new brand from the maternal operator,” said Filip Hanker, editor-in-chief at the website Živé.sk dedicated to communication technologies. “They use a different strategy for different segments of the market and a brand with its own identity can provide a different form of communication and avoid comparison.”

But the Slovak mobile market has also seen some unsuccessful projects in the past. For example, in the past there were also Naymobile, mPhone or Swan Mobile. While Swan has actually entered the traditional mobile market and is now building its own network and selling its mobile services under the brand 4ka in cooperation with Slovenská Pošta, the first two do not exist any more.

“MPhone was a very specific project also in terms of Slovakia because all other reselling brands were designed to address a mass segment and common clients,” said Korec of Slovak Telekom. “MPhone was the first and only project choosing the target group of business clientele. But the B2B sector is relatively demanding and it needs even bigger segmentation; an individual approach and different selling channels.”

Slovak Telekom sought with this model to try reselling its services in the business sector, but it did not raise enough interest, said Korec.

In spite of the existence of several branded resellers there is no virtual mobile operator, with the Slovak market’s high penetration level – 130 percent – as a likely cause. This limits the space for new players as costs for the launch of a virtual operator are higher than for a branded reseller.

“The fact that there is no virtual operator that can be linked with the small size of Slovakia, that the number of clients does not grow significantly and that the average revenues per client are decreasing,” said Maxa. “On the other hand, in Slovakia [with 5.4 million citizens] there are four full-fledged mobile operators, which is the same number as in Poland, which has 38 million people.”

Jamrichová of O2 also pointed out that the current trend in the world is consolidation of operators as a result of high competition as well as on-going regulation on the local as well as European level.

“The funds can be invested in a better way than creating a classic virtual operator,” Macko said.

While Apple SIM service is not yet available in Slovakia, it means new challenges for the mobile market. Apple already introduced the Apple SIM service that enables the user to choose the most beneficial data package directly on his or her device. So far the service is available only in the United States and Britain. Microsoft is also considering a similar project.

Slovak operators do not offer such solutions yet, but they have packages that can significantly lower the costs of mobile data abroad, according to Maxa.

Macko added that it is something like a virtual SIM, while the client chooses the best available offer directly in the mobile device and makes calls from his or her number.

“Slovak operators are in no hurry with such projects as they represent a completely new form of competition,” said Macko.