To maintain the competitiveness, the Slovak government must support digitising the economy and take a positive stance towards the ICT sector, according to experts.

The importance of information and communication technologies will only increase, but this remains a challenge for Slovakia and its economic reliance on industrial manufacturing.

Companies will digitalise their processes and will need significantly more internet computer technology (ICT) experts, Mário Lelovský, the head of the IT Association of Slovakia (ITAS) wrote in the intro to the Importance of the ICT Sector for Slovakia study for 2016.

“Slovakia is traditionally a strong industrial economy, which these changes will affect the most,” he predicts.

In order to maintain the competitiveness of Slovakia’s economy the Slovak government must support digitising the economy and take a positive stance towards the ICT sector on all levels starting with education via re-qualifications up to motivating companies to innovate, Lelovský said.

Education remains a challenge, since there is not just a lack of teachers but also low interest of young people in studying IT. ICT companies have also been calling for better conditions for doing business in Slovakia. All told Slovakia is estimated to lack more than 10,000 IT experts.

The ICT sector accounts for 4.6 percent of GDP, compared to 13 percent of GDP generated by the automotive industry. While the ICT share may look small, it has been achieved by a labour force making up only 2.3 percent of the employment in Slovakia or just 62,000 people, according to the study Importance of the ICT Sector for Slovakia study for 2016 ITAS elaborated in cooperation with INESS Consult.

The average wage of an ICT worker was €1,968 per month in 2014, 93 percent higher than the average wage in the Slovak economy. High wages mean also high compulsory health and social insurance contributions as well as paid income taxes.

Moreover, the return of the state aid in ICT is 0.7 years whereas in the automotive industry it is 4.2 years. ITAS also points out that while the state is supporting the arrival of the fourth carmaker, Jaguar Land Rover, which is building a brand new plant near Nitra with a subsidy of €130 million, this sum is four times greater than all the incentives for the ICT sector ever provided by the state.

Experts agree that the ICT sector has an enormous importance for Slovakia’s economy. 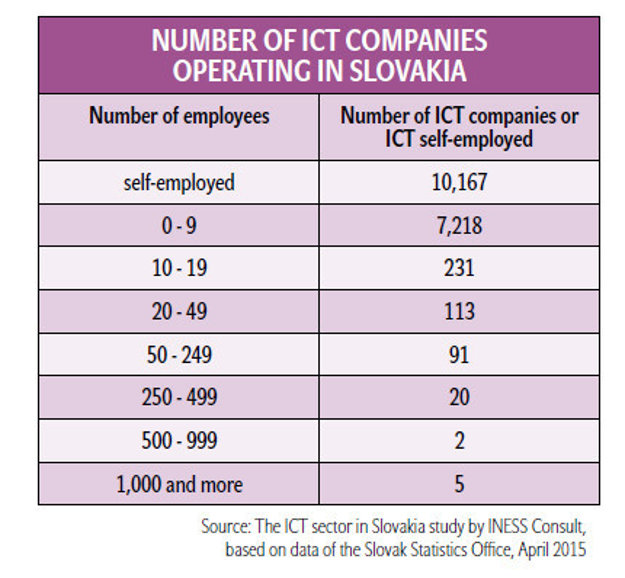 “Slovak economic growth used to be driven mainly by the thriving manufacturing sector, especially its automotive part, but in recent years the country has seen an increase in the importance of the ICT sector,” Katarína Muchová, economic analyst with the Slovenská Sporiteľňa bank, told The Slovak Spectator.

The gross value added contribution of the information and communication sector was almost 5 percent of the total in the first half of 2016, according to Muchová.

“Although it is unlikely at the moment that ICT will take over the dominant position of manufacturing, the country supports the sector as it understands its increasing importance,” said Muchová.

According to the World Economic Forum, Slovakia is transitioning from an efficiency-driven to innovation-driven stage of development, and thus should implement measures to support innovation and R&D.

“Addressing research and innovation, support to SMEs, quality education and inclusive labour markets may foster convergence and competitiveness of the Slovak economy, helping to achieve sustainable growth in the long run,” said Muchová.

Muchová recalled that the European Commission approved Slovakia’s Research and Innovation operational programme for the 2014-2020 period with allocations reaching up to €2.3 billion. The priorities relate to particular economic areas (among them automotive and mechanical engineering industries, ICT, consumer electronics and electrical equipment) as well as addressing the scientific and research capacities of the country.

Source of innovation and growth

Ivan Lužica, partner at Deloitte in Slovakia, sees the ICT sector as an engine propelling the economy.

“It is exactly this sector which is the source of innovation and growth,” Lužica told The Slovak Spectator.

The Deloitte Technology Fast 50 ranking in Central Europe that Deloitte published in late October 2016, proves this. It is prepared based on their five-year revenue growth.

Five Slovak companies placed in the latest annual ranking. Compared with 2015 Slovakia’s position remained more or less stable. But in 2013 only two Slovak companies appeared in the ranking and in 2014 it was three.

Slovakia again had a representative in ‘The Big Five’, the ranking of companies that are too big to compete with the smaller companies. But in 2016, Eset, which had been on this list for 13 consecutive years, was replaced by software company Aliter Technologies.

On the other hand, for the second consecutive year Slovakia wasn’t represented in the category of Rising Stars.

Analysis of the international rankings shows that Slovakia achieves the average or below-the-average values and the tendency is both for the values and the standing of Slovakia to fall back or at best to stagnate, according to the Importance of the ICT Sector for Slovakia study for 2016. In one of the rankings that assesses the overall development of the ICT sector, Slovakia has fallen behind other six countries in comparison with 2011. The same applies to its unfavourable 20th position from among 28 EU countries in the ICT Development Index where Slovakia appeared in the 45th position and which resulted in a lower position in Digital Economy and Society Index 2015 with a total score of 0.42.

“In this regard, Slovakia is in the same group with other countries with low performance that achieve results only slightly above the average,” reads the study.

When comparing various indexes and criteria, the study identifies the public sector as the weakest link.

“Slovakia lags behind in areas like enforcement of the law and public procurement of advanced technologies where it ranks among the least progressive not only in comparison with other western European countries but also in global rankings,” reads the study.

It identifies four problematic areas with a rather big influence of the state. These are inefficiency of the public administration, lack of human capital, weaknesses of the business environment and availability of broadband internet connection.

Lack of IT experts

Out of all challenges the ICT sector faces, the lack of IT experts is probably the most urgent. The sector lacks people even though the average wage of an ICT worker is high.

“Almost immediately only a part of ITAS members would be able to employ more than 10,000 people,” said Lelovský.

In this respect Lelovský sees large space for improvement while Slovakia should take neighbouring countries, in which a foreign professional can get a work permit within a few days as an example.

“In Slovakia this takes more than six months,” said Lelovský.

But what Lelovský sees as the biggest hindrance in the development of the ICT sector is education. Not only are there no people to teach, but there is also a lack of interest among the young generation, which “prefers lighter fields of studies and an uncertain future contrary to well paid positions in the ICT sector, which are not only about programming”, according to Lelovský.

Nevertheless, Lelovský sees an improvement in terms of education as those responsible in the government have started to pay a greater attention to this matter.

“We plan in cooperation with Labour Ministry to launch a project of re-qualification and together with the Education Ministry we are operating a project of IT Academy,” said Lelovský, adding that in the latter they plan not only to educate future employees but also those who would teach them. 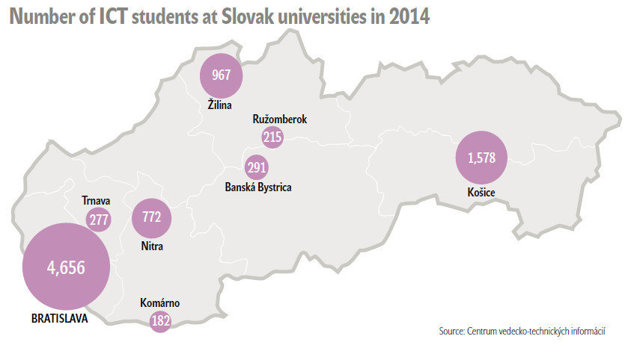 In 2015 Slovak President Andrej Kiska criticised the electronisation of state and public services in Slovakia for not progressing fast enough, despite the presence of ambitious projects.

ITAS perceives this criticism as justified but Lelovský hopes that better times are coming.

In the meantime, as of November 2016 state bodies and institutions have to primarily communicate electronically via electronic letterboxes.

Prospects for the future

ITAS sees two possible developments for the ICT labour market. In the pessimistic one there would be no improvement on the part of the educational institutions despite the growing demand on the part of employers for a qualified workforce. This may lead to the departure of ICT companies from Slovakia due to lacking labour force, poorer performance by the ICT sector and missing the train on smart industry. The optimistic scenario is that changes are made in education and that employment in this sector grows.

“I do not want to be too pessimistic, but there is still a lot of work ahead of us,” said Lelovský. “We need a change in society; we need the state to realise that assembly halls are not here forever and that educated people can move the country in the proper direction.”

Lelovský pointed out that all the changes in education have one common feature, tech skills will be necessary no matter the profession.

“And while in some sectors there will be more robots, the number of people who will be able to mend and maintain them will have to increase too,” he said.

In this respect, the ITAS study highlights that information technologies are not solely about the electronisation of processes, or eGovernment, but also about improving efficiency across multiple sectors. Especially important they seem to be in the area of industrial production where it is already common to speak of a new technological revolution referred to as Industry 4.0.

“Industry 4.0 represents a great opportunity for development of production with higher added value for Slovakia’s economy,” reads the analysis. “If the state does not create conditions for the growth of the ICT sector, Slovak companies will again only import new technologies, without the benefits their development brings.”

Based on the estimates of the Boston Consulting Group - analysing implementation of new technologies in the German economy - these new innovations are going to increase productivity of the manufacturing sector by 5-8 percent with a possibility for carmakers to grow by more 10-20 percent, the study reads.

“Foreign investors will understandably want to implement these innovations also in Slovakia where it is possible to count on similar values of growth,” the analysis reads. “This presents an immense opportunity for the ICT sector as well as a possibility to increase the manufacturing share of high added value in Slovakia.”

But ITAS warns that this potential may well be hindered or even reversed under the current ICT conditions in Slovakia.